Home » Home safety » Is Magnalite Cookware Safe to Use? Magnalite was an aluminum cookware line introduced by the Wagner Manufacturing Company (Wagner Wares) that took pride in its being family business. This company was a household name in the cookware industry from the late 1800s to the mid-1900s.

Wagner Wares introduced the Magnalite range to the market in the early 1930s and this kept the company afloat during the Great Depression. Aluminum was a better heat conductor compared to their usual cast iron. Magnalite cookware was also designed by industry professionals to maximize heat and this boosted sales.

Table of Contents
What researchers foundSo, is Magnalite cookware safe to use?
What to look out for in your cookware 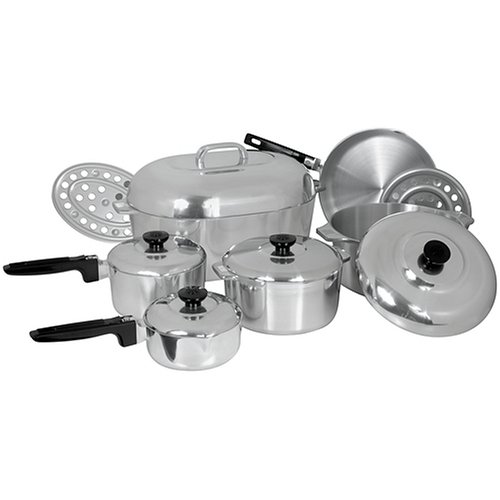 In 1965, researchers exposed rabbits to aluminum salts for an experiment and this metal triggered neurofibrillary tangling in the brains of these animals by mistake. These results led scientists to believe that Alzheimer's disease could also be caused by aluminum ingestion.

More experiments were later performed on animals and they resulted in aluminum-free animals doing better in physical tests. Animals who were given aluminum also gave birth to weaker offspring.

Researchers also believed that kidney failure was caused by aluminum. This was because people with kidney failure have more aluminum in their system than those without it. They later found out that these abnormal aluminum deposits were caused by the kidney failure itself as this organ plays a vital role in removing toxins in your body.

So, is Magnalite cookware safe to use?

Research on the health implications of ingesting aluminum constitutes of subjects who were purposefully given certain amounts of this metal through food or medicine. This is what's making people reverse their stance on not using Magnalite cookware. Most people don't want to take that risk, but recent developments could relieve them from their fears.

According to the World Health Organization, adults can consume up to 50 milligrams of aluminum a day. Acidic foods like citrus fruits/fruit juice and tomatoes absorb the largest quantity of aluminum. That “large quantity” however, was only 0,0024 milligrams per cup based on a study that involved making tomato sauce in an aluminum pot for 2 hours. The sauce was also left in it overnight.

What to look out for in your cookware

Before you go ahead with cooking in your Magnalite pot, you should ensure that it's made up of anodized aluminum. Anodizing aluminum means that the metal will go through a process that'll increase the size of its natural oxide layer. This layer will make your pot last longer and it'll also create a barrier between your food and the aluminum encased within.

If your cookware set isn't made of anodized aluminum, you run the risk of ingesting more aluminum. This means you'll have to prepare foods that have lower acid levels like potatoes and quinoa in these. If you an anodized set, you should avoid using metal utensils when preparing food as this will scratch your oxidized layer and the utensil’s non-stick layer.

You should also be careful of how you wash your cookware set as aluminum needs to cool properly before being washed. Sudden changes in temperature will make your pot bases to get deformed and compromise their oxidized layer.